Menu
Log in
Register
Install the app
You are using an out of date browser. It may not display this or other websites correctly.
You should upgrade or use an alternative browser.

I have been coding in the past few weeks on a set of scripts which I have dubbed the EZ Processing Suite. Although it doesn't do only processing and the script collection is still small I still want to share it with you guys.

It's still early days and heavy under development and constantly improving. Just a few minutes ago I ported all the scripts I had to my new EZ Common Runtime 2.0 - so yeah expect things to not work 100% smoothly or break. Some scripts will require StarNet++ either running in PI or a mask generated by StarNet++ from the application.

This is the base I have coded all scripts on. All scripts feature similar features (where applicable): 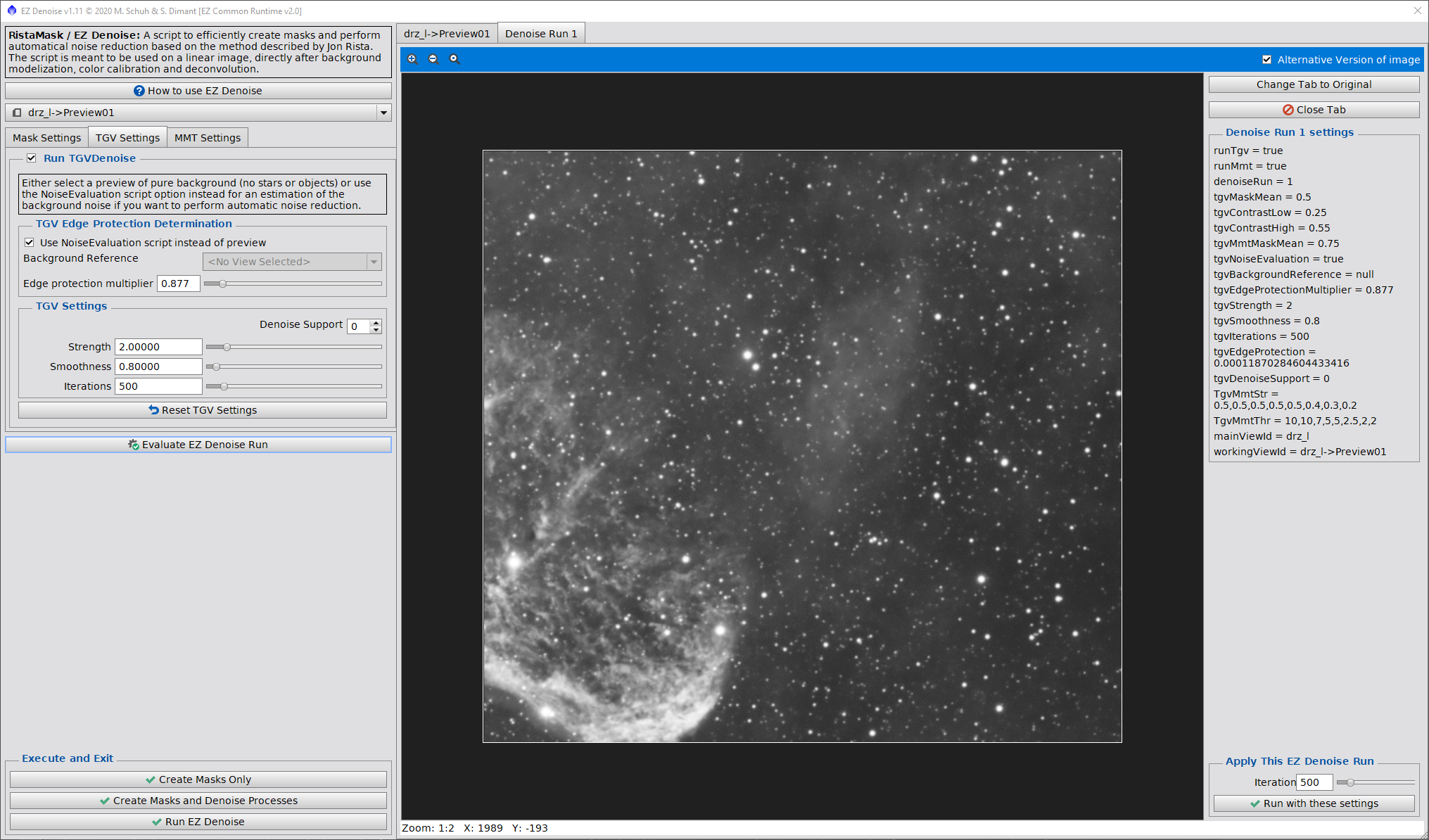 A script based on OkeWoke's (a friend of mine) deconvolution method by running deconvolution without deringing and replacing the stars with an extensive star mask afterwards. Uses StarNet++. 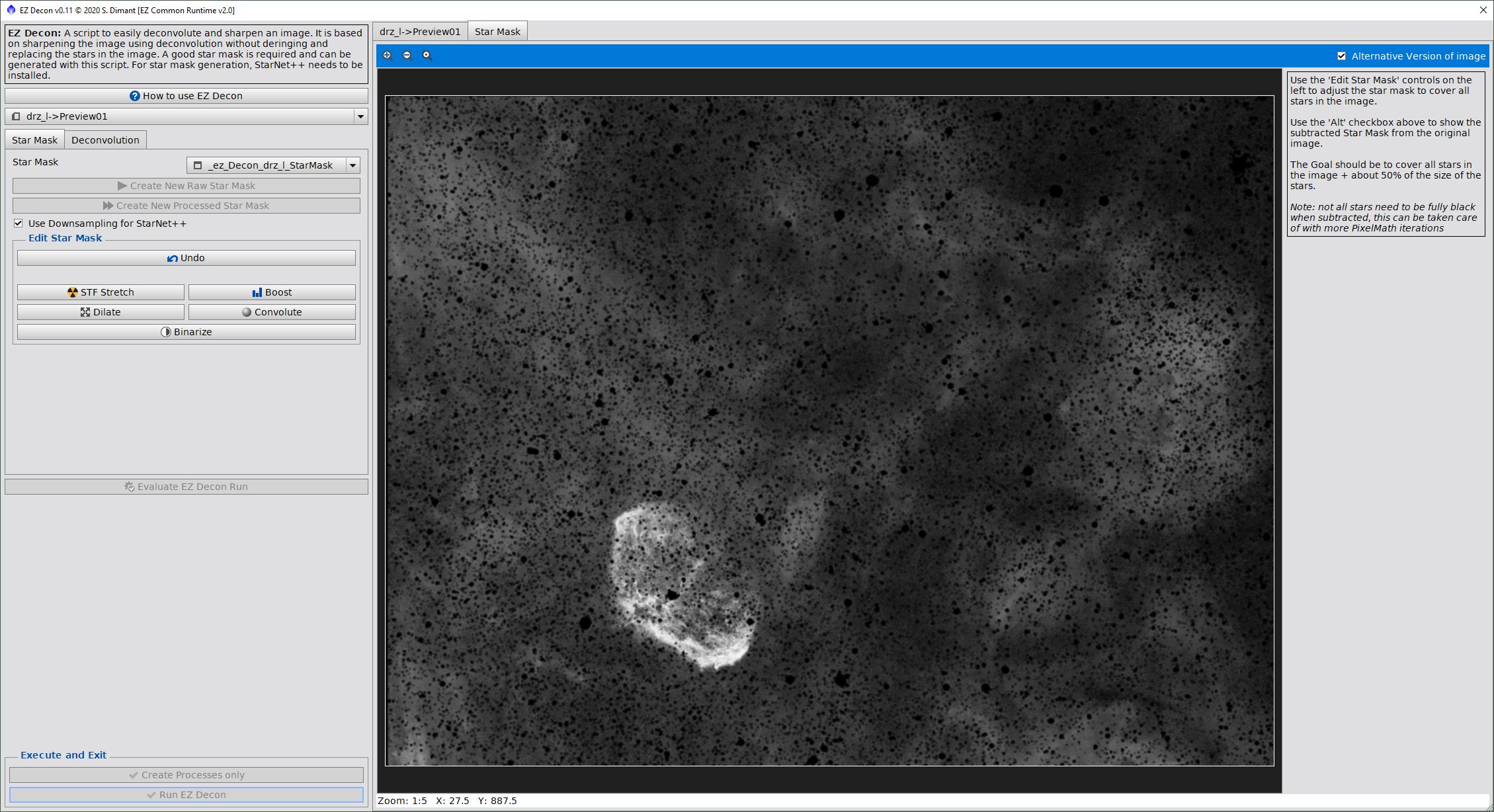 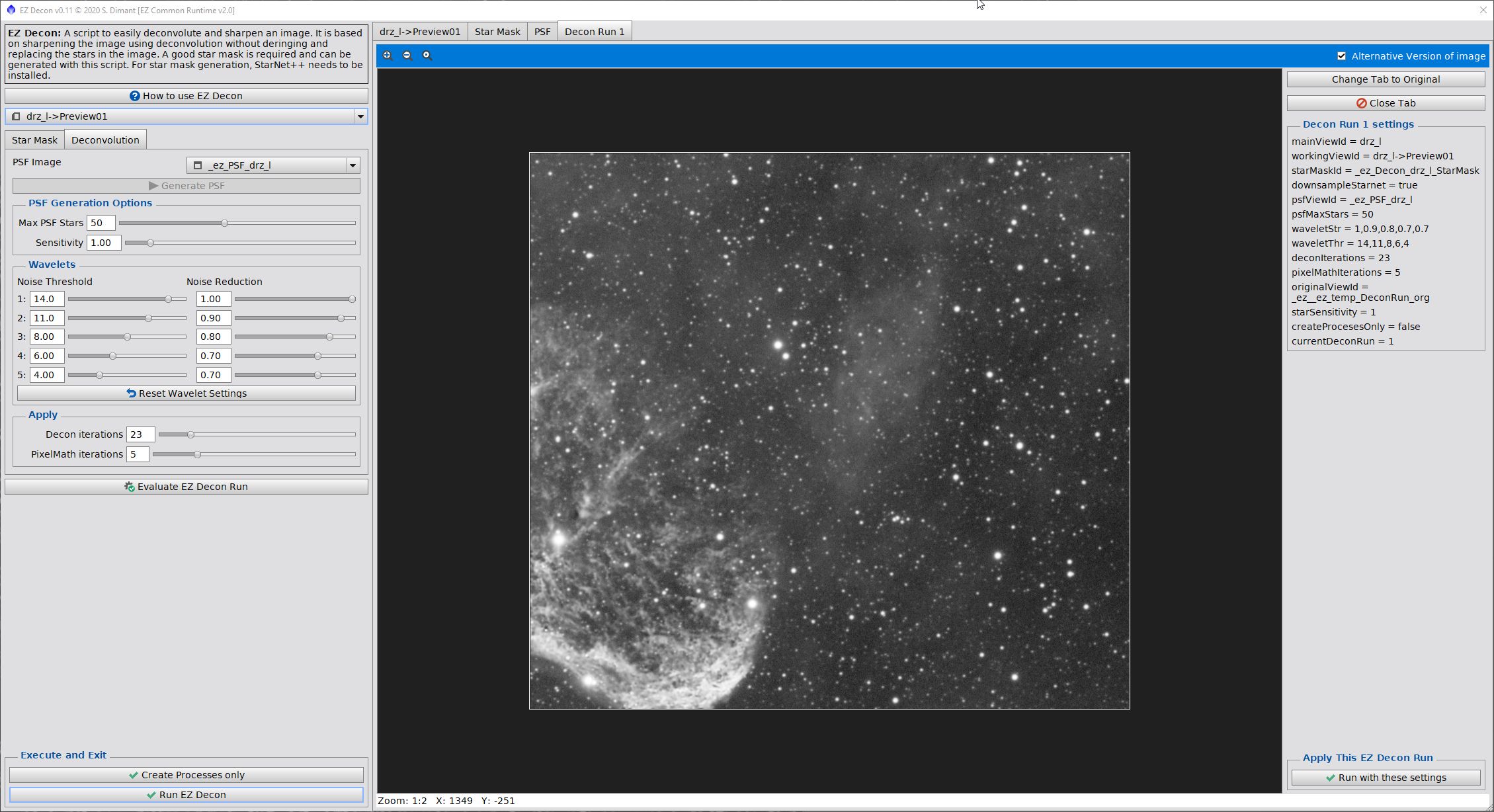 A script that will use the HistogramTransformation to stretch an image to a non-linear state with automatic black point detection and reliable median calculation based off my own methods of stretching images to non-linear. 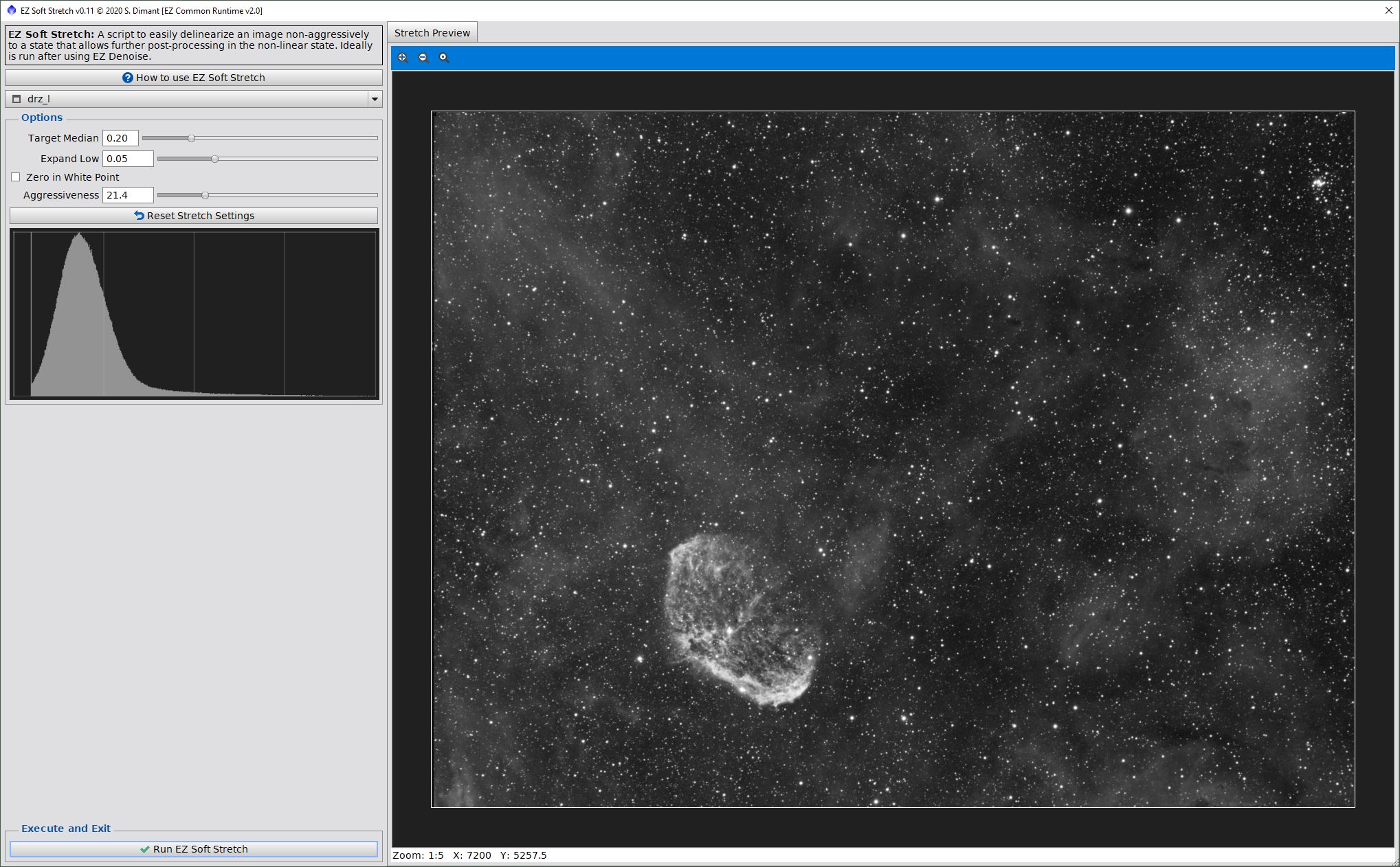 Utilizing StarNet++ this will generate a reliable contours mask which then uses MorphologicalTransformation to reduce star sizes reliably. Easy to use and good, not too strong results.

Screenshot of the UI: 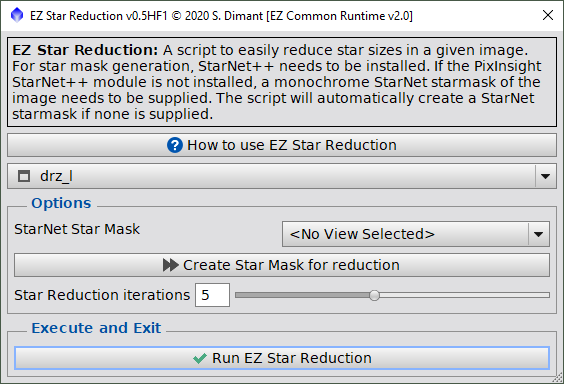 Not really a processing addon, but it does exactly what it says. It will monitor a folder for incoming files and stack them together, giving you a good preview of what the nights' result will be. 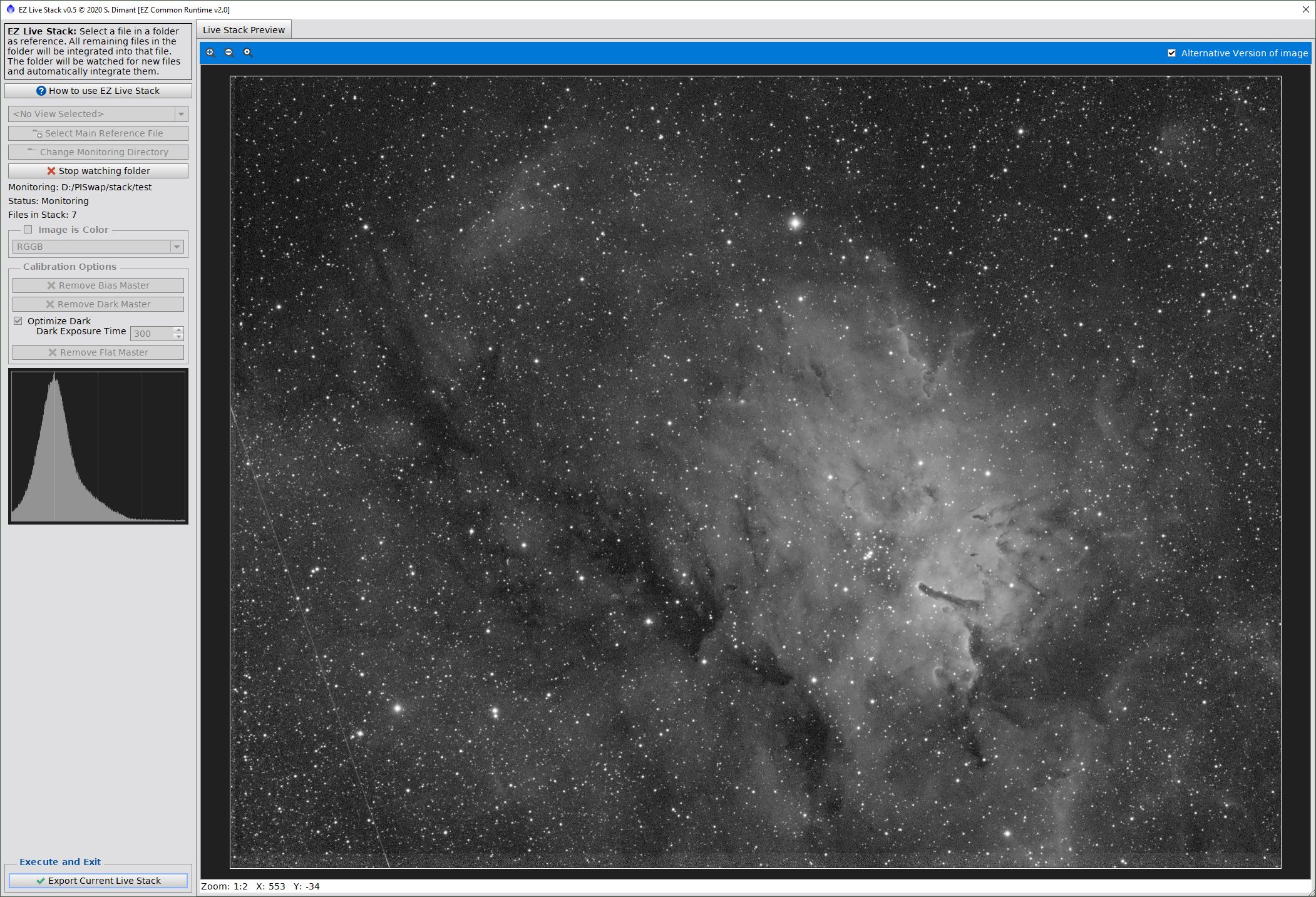 And that is it so far. More is to come, more features for each script too as I know myself. If you have any ideas let me know.

If you made it this far you might be interested in actually getting it, the repo URL is https://darkarchon.internet-box.ch:8443/

Thanks for reading and have clear skies!

The repository has permanently moved to https://darkarchon.internet-box.ch:8443/
PixInsight does not handle redirects well (errors out with 301) so the repository needs to be re-added. 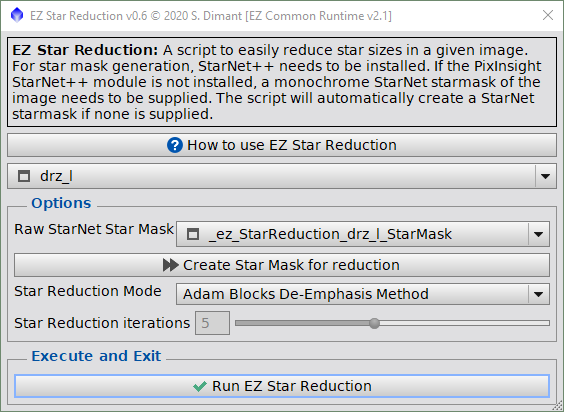 Just installed it and trying out the deconvolve process....
F

DeNoise and Star Reduction works very well. I had less success with Deconv. Great contribution putting these together.
D

freed said:
DeNoise and Star Reduction works very well. I had less success with Deconv. Great contribution putting these together.
Click to expand...

Hi freed, if deconvolve doesn't work properly for you try adjusting the wavelet layers down. If it increases noise too much you might need to up it again. It's possible that deconvolution doesn't do much for that particular image at all.
F

I think you are right with the frame I had in mind. Thanks
F

Quick question on Live stack. Does it stack frames from one filter type only or anything in the folder ?
D

Live stack stupidly watches a single folder for everything that comes in at the moment. It does not regard filters. You would need to separate your filters to folders. Might add it in a future update.
F

Got it. Thanks. Yes, it would be easier, if it could be made filter specific.
D 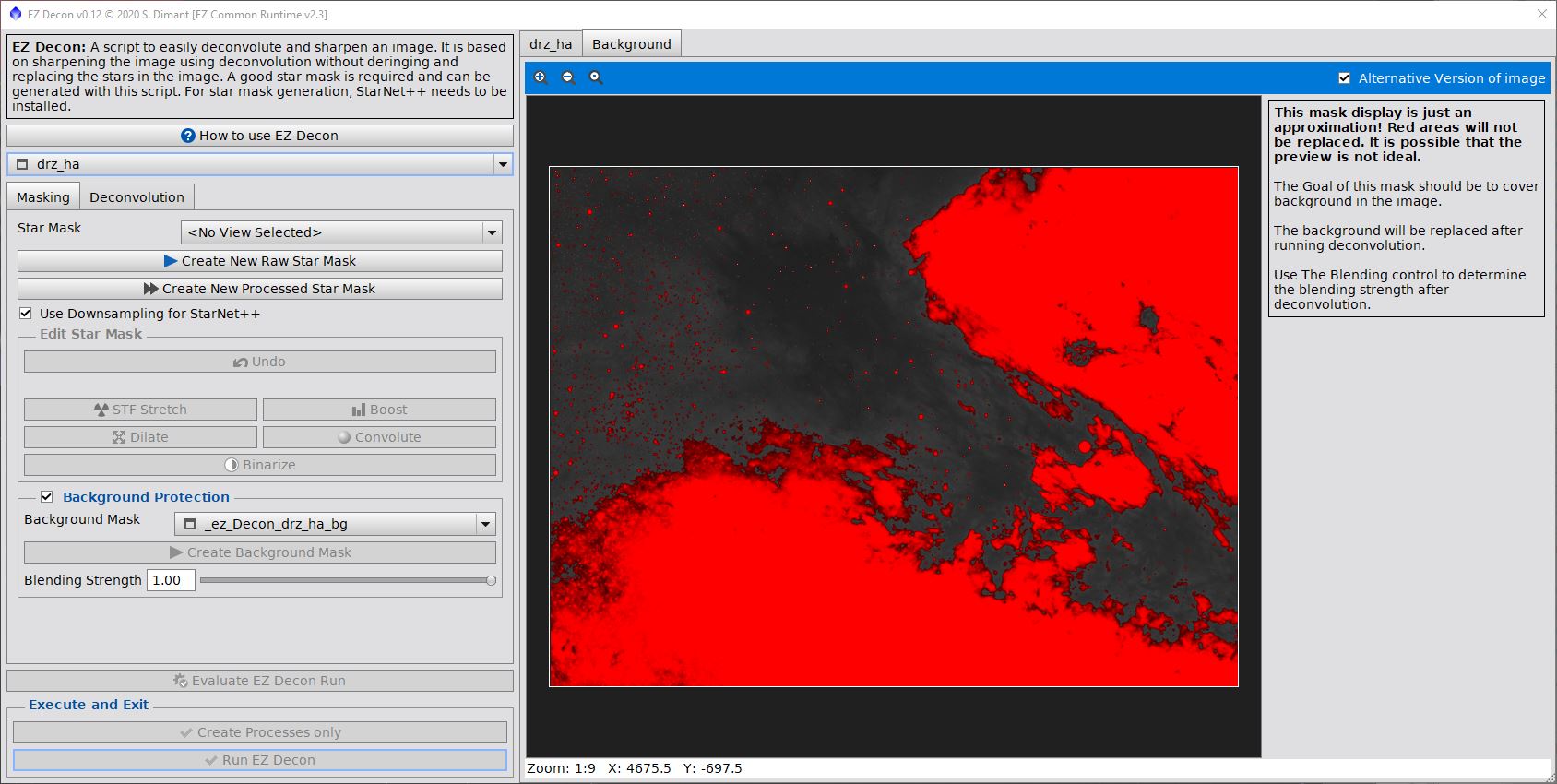 i just looked at the decon script but could only find a subexposure when looking for a linear file, so the results are not proper. however, it does work great.

Thanks for the heads-up, fix is pushed.
D

Your suite looks great on all enthusiastic video demos I saw! However, I have a crash in EZ Decon on my Mac, after getting and installing the Starnet++ module StarNet_PI_OSX from sourceforge. Here is attached the trace.
One more thing: Starnet++ seems inactive to create the mask, likely because of missing GPU support. I made it from the StarMask process.

Thanks for any help,
Clear skies,
JB

Hmm yeah I heard of a few crashes of decon during window resize operations, I'll check it out, might be related.
D

EZ Live Stack 0.7 deployed
- can now stack multiple different stacks in parallel
- can do simple RGB stacks for mono data (with R/G/B or Narrowband channels)
- can run SCNR Green on RGB stack
- each stack can now separately choose whether to ignore filters in metadata or not
- icons in tab for current stack status
- various usability improvements

This very cool. Any possibility of adding data on FWHM and eccentricity ?
D

What would be the use case on a live stack?
P